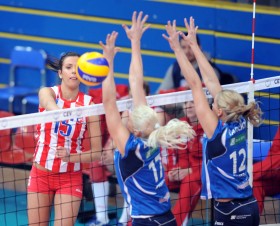 With this result the guests from Poland advance to the 1/8 finals as the third-ranked team from Pool E while Crvena Zvezda is moved to the Challenge Round of the CEV Cup.

Bank BPS Fakro opened strongly (4:8, 11:16) and even though the home side clawed back up to -2, still they changed gear once again and could go for a comfortable 15-25.

Crvena Zvezda played well in defense in set 2 but Vesna Djurisic opened the gap for the guests moving the score from 9:16 up to 13:23 before going for the provisional 0:2.

Crvena Zvezda finally displayed its full potential in set 3 after head coach Ratko Pavlicevic had made some changes.

Outside hitter Ljubica Kecman anchored her side and after trailing 11:16, the home girls drew level at 20 all.

Bank BPS Fakro missed on four consecutive match balls before the set was closed by the excellent serving of Serbian setter Jelena Medarevic.

“This was a difficult game for us because last week we had played with many ups and downs. We must be satisfied with this win because we beat Crvena Zvezda at their home. These young girls provided strong resistance” says former Serbian national team player Vesna Citakovic-Djurisic.

“This competition is very demanding, especially for our young team. Our goal was to gain as much experience as possible. We lost six games, but we tried to play the best we can” adds local mentor Ratko Pavlicevic.

CEV CL: Polish rookie completes prelims with a win and is happy with second place