Prostejov, Czech Republic, January 17, 2011. In the sixth round of the prelims the Czech champions of VK Modranska PROSTEJOV finally managed to win their first match in Pool C of the 2012 CEV Volleyball Champions League. 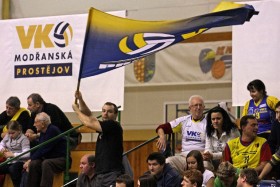 Tonight’s match ended in a 3:1 loss for Dinamo KAZAN (25-18, 25-20, 22-25, 25-19); this time the motivation of the hosts was huge and the guests were significantly weaker  because most of their usual starting six players had stayed at home.

The Russians were not in a perfect shape tonight.

They decided to give some free time to their five top players who stayed in Kazan (opposite and captain Gamova, middle blocker Borisenko, setter Babeshina, spikers Larson and Makhno).

The Czechs seized this opportunity and played good with the exception of set 3 where they slowed down their tempo.

The second choice players of Dinamo were not strong enough to win over VK Modranska whose all-round performance was very good this time.

“We came to the Czech Republic without some of our top players. Those who played tonight are very young. It is true they were fighting with glowing hearts but it was not enough to win the match. It is a pity we lost, but actually it is not a problem for us at all” says the team captain of Dinamo, Elena Ponomareva.

“Tonight our performance was slightly better than in the previous Champions League matches. We made our wishes come true and our play was almost perfect. Our performance in serving, reception and attacking was very good in three sets out of four” singles out the team captain of VK Modranska, Solange Soares.

“We wanted to win even without our biggest stars. However, the hosts have a good team and a lot of experience from the previous years they spent in the Champions League and they did better throughout the whole match. On the other hand, some of our girls played for the first time tonight. We had problems mainly with defending against their kills from the centre. Congratulations on their win and thank you for the great hospitality and organization” says the head coach of Dinamo, Alexander Perepelkin.

“We do not want to hide that it was easier for us tonight because the visitors were not complete. Nevertheless, regardless the lower quality of the opponent, our performance was extremely good especially in attacking. All our girls did a great job. On the opposite side it was only Ponomareva who gave us a hard time. On our side of the net all players played good so we deserved to win” says the head coach of VK Modranska, Miroslav Cada.

CEV CL: Reigning champions finish atop of their group after home win