CEV CL: Reigning champions finish atop of their group after home win 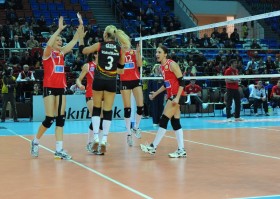 Reigning champions finish atop of their group after home win

Vakifbank started well and the guests were forced to ask an early time-out by the score of 6:3; a second break was called at 12:8 but the Italians could not stop the triumphal march of the local heroines.

The Turks showed good momentum also in set 2 (11:8) and after leading by four at the second technical time-out, they cruised easily to the final 25-20.

Volley BERGAMO got more consistency in set 3 mainly via Valentina Diouf – top scorer at the end of the game with 21 points – and even though the hosts made some changes, still they could not stop the run of their opponents (18-25).

“We have quite weak opponents in the national league so that’s why we are always motivated in the Champions League as we play strong sides here. The leadership in the group is very important also psychologically as we can get a good draw for the next round” stresses home head coach Giovanni Guidetti.

“We made many stupid mistakes especially in reception in the first couple of sets. We played good in set 3 but did not have much luck in the last set” says BERGAMO mentor Davide Mazzanti.