CEV CL: Polish rookie completes prelims with a win and is happy with second place 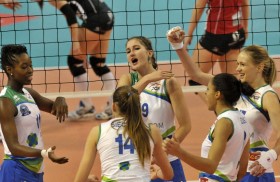 She went into the service area while the hosting team was trailing 4:5 and stayed there until the score had moved to 9:5.

She produced a few points with back-row attacks, service aces and helped with a very good defense.

The guests couldn’t withstand the speed of the local team who were playing with all their hearts and with incredible ambition.

The Swiss spikers were unable to break through the Polish block and lost the set 16-25. The second set begun with a strong hit of Volero, who led 4:1.

Opposite Jelena Alajbeg performed well, winning points from the first as well as from the second line.

But the key player of this part of the game was Nina Rosić.

Volero libero was covering the whole court in defense, diving with sacrifice and efficiency.

Moreover, the guests were serving on Hodge, who received very badly.

The third set (especially its second part) was very close.

But it was Atom to take it home at 25-22 with a strong spike by Megan Hodge closing it.

The situation changed entirely in the next few minutes, with the Swiss team leading 8:2 at the first technical time-out of the fourth set.

Megan Hodge served 2 aces and leveled the count (11:11); Volero took this section of the game (25-22) but in the tie-break Atom didn’t give any chance to the Swiss girls going confidently to score the final 15-10.

CEV CL: Eczacibasi resists to German storm to finish second in Pool A