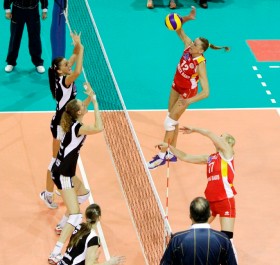 With this result and in combination with the 1:3 defeat of DRESDNER SC to Fenerbahce, the French club is ranked fourth in the group and will therefore be moved to the Challenge Round of the CEV Cup.

The opening of the match was much disputed with Rabita going up by a slim margin (6:8) that was gradually widened by the second mandatory stop (8:16); with their Serbian trio – Golubovic, Starovic and Krsmanovic – together with Natalya Mammadova, Rabita went up 10:20 and finished the set with good tempo even though the hosts were well anchored by some good spikes of Anna Rybaczewski.

Rabita caught a splendid start in set 2 (2:8) before MULHOUSE fought back for the 12 all.

The home girls played with glowing hearts and hit back to 12 all; Rabita BAKU got back the leadership (15:18) and ASPTT MULHOUSE could not stop the match of the Azeris (20-25).