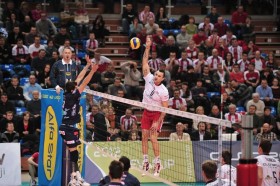 The Polish team showed its strength and potential especially in service scoring 8 points in this element.

The top scorer of the game was Asseco Resovia opposite György Grozer (19 points) who displayed a massive service scoring 3 aces and causing French players major upsets even though they are famous for having a good reception.

The most competitive battle was in the second set in which Resovia was leading 24:22 but Arago de SETE leveled the score (24:24) thanks to the impressive counter-attack presented by Marien Moreau.

In the third set the French team was still fighting but when the score stood at 18:16 for the hosts German spiker – György Grozer (pictured) gave his concert from the serving area.

Thanks to his fantastic performance Resovia jumped away (22:16) and after a moment could celebrate the promotion to the next round.

Last year Asseco Resovia played in the semi-final of the CEV Cup and at this stage was stopped by Italian legend Sisley TREVISO.

This season the ambitions of the club are also very high.

Thanks to the quick victory over Arago de SETE the Polish team can focus on the Final Tournament of the Polish Cup which will be held in Rzeszow this weekend (21-22 January).

“The return game against Arago de SETE was for us a good test before the Polish Cup Final Four Tournament. Maybe at the end of each set we missed our focus, especially in the second section but the most important thing is the fact that we got a victory not losing too much energy” said the captain of RZESZOW team, Aleh Akhrem.

“The French team has a very good defense and we had to be very patient in our offensive play. The result is of course advantageous for us but there was a fight because Arago de SETE is a good team which came to Poland in order to win and extend their chances. Thus we are very happy that we managed to win in straight sets. Now we can focus on the final tournament of the Polish Cup” added Andrzej Kowal, Asseco Resovia head coach.