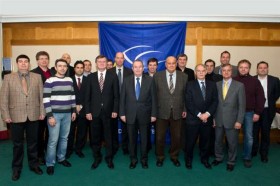 Prelim Pools and calendar of 2012 European League are determined

By opening the meeting Mr. Meyer recalled that the women’s competition will once again assign two tickets for the next edition of the FIVB World Grand Prix while the winner of the men’s division will book a pass for the intercontinental qualification round scheduled for this summer and that will eventually qualify one team for the 2013 FIVB World League.

The CEV President also stressed the positives figures registered for the past season in terms of attendance in the sports hall, although some work still remains to be done in the near future to make this competition even more attractive and appealing.

ESOC President Pierre Mulheims informed all National Federations that the competition format was changed in comparison with the past years taking into consideration the very tight calendar in this Olympic season.

The men’s competition will be joined by a total of 10 teams divided into two groups of 5 each; round-robin tournaments will be played with the participation of 4 teams with one of the five assigned to that group resting on one weekend.

So finally all Federations will organize a home tournament running through late May up to the fourth weekend of June.

The venue of the men’s final four is still to be determined and all Federations interested in hosting this prestigious event were invited to submit their application in the coming weeks.

The composition of the Pools for the men’s competition reads as follows:

The calendar of the League Round reads as follows:

As for the women’s competition, 12 teams are set to participate being distributed across 3 groups of 4 each. The League Round will hence consist of 4 legs running through the month of June with the final four being already assigned to the city of Karlovy Vary (Czech Republic) that last year successfully hosted matches of the 2011 CEV Volleyball European Championship – Men.

The last act of the women’s competition is slated for the first week of July (final dates still to be fixed).

The composition of the Pools for the women’s competition is:

The calendar of the League Round reads as follows:

CEV VC: MONZA does not take return match with BERLIN too easily