Switzerland: Berruto eager to bounce back from World Cup disappointment

Lausanne, Switzerland, January 20, 2012 – Italy coach Mauro Berruto has admitted that the pressure got to his side at the FIVB Volleyball Men’s World Cup in Japan last December, but that the side is now 100 per cent focused on reaching the London 2012 Olympic Games. 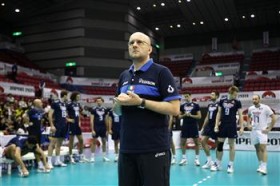 Berruto eager to bounce back from World Cup disappointment

The Azzuri narrowly missed out on a podium place and an Olympic berth to Poland due to set ratio and Berruto blamed the pressure of the occasion as a central factor to that failure.

“Tension remained high during the tournament because we won the silver medal at the European Championships. We had a great desire to do well, but often the urge paralyzes us and this happened against Poland,” he said.

“Coach Anastasi (Berruto’s predecessor and Poland coach) took advantage of our failings and did very well making the right changes. His athletes were just as smart to implement his scheme.”

However, the 42-year-old has already established where his team need to improve if they want to reach the Games.

“We must improve in the decisive moments, when a ball is near the ground,” he said, adding that if he could reply any match he would “choose Poland v Italy, precisely, the second part of the match.”

Poland: Kądzioła and Szałankiewicz in the Institute for Mother and Child