The Drawing of Lots for the Playoffs 12 of the 2013 CEV Volleyball Champions League assigned another Italian team to ACH Volley LJUBLJANA, namely Bre Banca Lannutti CUNEO, after the side from Slovenia’s capital city had crossed its ways with Lube Banca Marche MACERATA in the prelims. 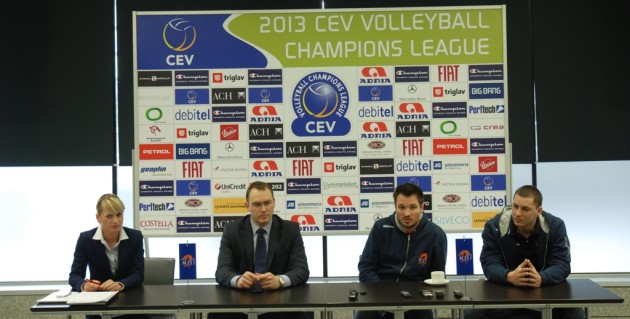 At a press conference held ahead of the match coming up on Tuesday, representatives of the Slovenian team made a review of the season so far and presented their expectations for the coming matches. The President of the Management Board of ACH Volley Rasto Oderlap is satisfied with the team’s achievements so far: “Despite problems at the beginning of the Champions League season, the team headed by Luka Slabe showed its true colors in the next matches. We proved that we belong to the top 12 teams in Europe”.

Luka Slabe, head coach of ACH Volley, says making it to the Playoffs 12 was the biggest achievement in his young career so far. As regards the next opponent, he compared Bre Banca Lannutti CUNEO to football club Real Madrid: “We will play against a very good team, which includes legends of international Volleyball like Nikola Grbic and Luigi Mastrangelo, but there are other excellent players as well. And there is also the excellent and very ambitious head coach Roberto Piazza. Bre Banca Lannutti CUNEO is similar to the football club Real Madrid. They have a lot of experience and the match in Stožice will be a real Volleyball festival. I hope that many spectators will come to support the team on this important day”.

Andrej Flajs, captain of ACH Volley, above all hopes that the Stožice hall will be filled to capacity and support the local team: “Bre Banca Lannutti CUNEO is one of the best Italian teams and they won all of their matches in the group phase of the competition. It is difficult to compare the two teams. We won against MACERATA in Stožice, while Lube Banca Marche edged CUNEO in the Italian national league. All Volleyball fans know what this team is capable of. We will give our best to get a good result, and I hope we will have strong support from our fans”.

Gregor Ropret, setter of ACH Volley, also doesn’t give up ahead of the match: “Everyone knows they are one of the best teams in Europe, despite the fact that they currently have some problems in the Italian league. Nikola Grbic, considered one of the best, if not the best setter in the world, is the leader of the team. The match will therefore be very interesting for me as well, because you don’t often get a chance to compete with such a player. The team has other excellent players as well, who have a lot of experience and are used to difficult matches. But we won’t give up and hope we can surprise them”.

Roberto Piazza, head coach of Bre Banca Lannutti, doesn’t take the match against the Slovenian champions very easily: “ACH Volley Ljubljana isn’t a team to be taken lightly, because they are very aggressive with their serves. Like TRENTINO, they play with two liberos: one for receiving and one for the defense. We should therefore be very good, playing a good game”.

Bre Banca Lannutti team captain Wout Wijsmans: “We are going to have a very long and hard trip: from Vibo Valentia we will go directly to Slovenia. I think that we can beat the team of Ljubljana, but we aren’t in a good shape at the moment. From this long trip we want to come back with two wins, knowing that it will not be easy. To do this we must believe in ourselves and in what we are able to do. The victory of the match is important because it would be an advantage for playing the return in Cuneo”.

Setter Nikola Grbic concludes: “It will be a very big challenge. If we play like we are able to, we can obtain a good result already in Ljubljana, without having to complicate our life with the golden set. We need the victory, because I think that it will give us the force to get out of this difficult time”.