In the battle for a place in the Playoffs 6 of the 2013 CEV Volleyball Champions League, the four-time club world champions of TRENTINO Diatec first edged Dinamo MOSCOW in straight sets but eventually lost the crucial golden set with the Muscovites eventually making it to the next round to play there their compatriots of Zenit KAZAN. 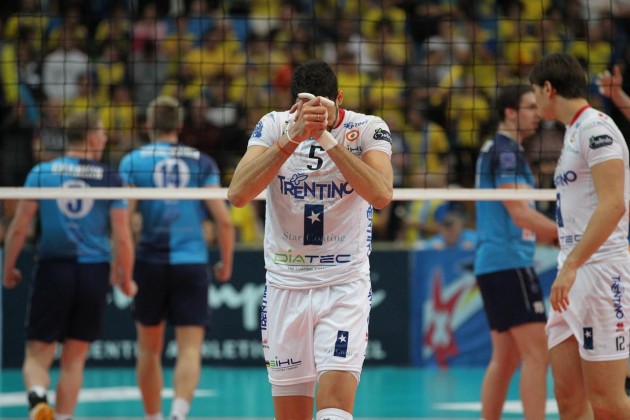 More than 3’000 supporters were in attendance and they somehow could attend two different matches on Wednesday evening there at PalaTrento. The club world champions captained by Matey Kaziyski first dominated the scene going for a speedy and comfortable 3:0 standing out with their blocks (9 in total) and also from the serving line (6 aces). The home heroes were continuously cheered by their home fans as they got back on track after their 2-3 defeat last week in Moscow.

However, the golden set that followed was a completely different story as Dinamo played there with great energy and could eventually pocket that much desired ticket to the next round.

Cuban-born wing spiker Osmany Juantorena (pictured) was named MVP of the match after he registered 16 points and attacked with 76% of efficiency, but this could not compensate for the major disappointment resulting from missing out on a spot for the next stage of the competition. On the other side of the net Pavel Kruglov top scored with 18 anchoring his side in the golden set.

“We knew that the golden set was very risky, and finally our concerns turned into reality. The golden set is simply a matter of luck but I have to say that this good luck needs to be somehow generated; it does not come by waiting for the mistakes of your opponents. Dinamo MOSCOW deserved the victory as they were better than us and played more intelligently. We have to accept that and keep going for the remainder of the season” stated the mentor of TRENTINO, Radostin Stoytchev.