Lube Banca Marche MACERATA cruised to a straight win over their compatriots of Bre Banca Lannutti CUNEO in the first round of the Italian derby scheduled for the Playoffs 6 of the 2013 CEV Volleyball Champions League – Men. 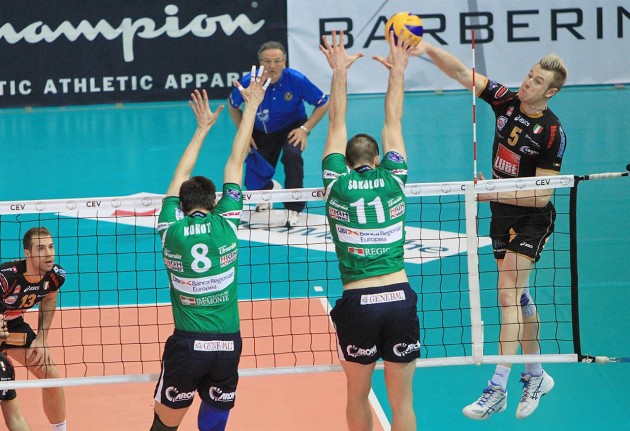 It was a great game for the home side that played superbly in offense with Ivan Zaytsev and Dick Kooy eventually top scoring with 14 and 10 points respectively.

The team mentored by Alberto Giuliani immediately got control of the operations in the opening set and claimed a reassuring margin via good serving by Kooy, Zaytsev and Dragan Travica not to mention the blocks killed by the Serbian duo composed by Dragan Stankovic and Marko Podrascanin (14:8). As the guests made many mistakes in attack – even three in a row – the score moved up to 23:15 for MACERATA that eventually closed the set only a few moments later (25-17).

The course of the game did not change in the second set with CUNEO replacing Earvin Ngapeth with Dore Della Lunga as the French spiker was blocked by Stankovic for the provisional 12:4; with Simone Parodi standing out in offense and great defense by libero Hubert Henno MACERATA dominated the scene in set 2 with Zaytsev and Kooy – who scored 5 points apiece in this section of the game – cashing the provisional 2:0 (25-17).

The match was more balanced in the third set especially as CUNEO improved their efficiency in attack. The guests were leading 19:18 and eventually moved up by two (20:18) on a block by Oleg Antonov before MACERATA scored the next two rallies to level the count at 20 all. Two errors by Sokolov and Antonov helped Lube move to the front (22:20) and Zaytsev blocked for the final 3:0 (25-22).

“I want to thank my players because tonight they really showed a great attitude and approached the match the right way” said Alberto Giuliani after the game. “This is a very important victory but our qualification for the final four is still not guaranteed. We do expect a tough game next week in Cuneo and we have to improve on some details if we want to win there as well”.