CEV CL M: Despite couple of setbacks Dinamo MOSCOW hopes for the better in return match with Zenit

Dinamo MOSCOW suffered another setback in the national league – this time to Gubernia NIZHNIY NOVGOROD – as the team from Russia’s capital city is heading into their second fixture against Zenit KAZAN coming up on Wednesday for the Playoffs 6 of the 2013 CEV Volleyball Champions League. 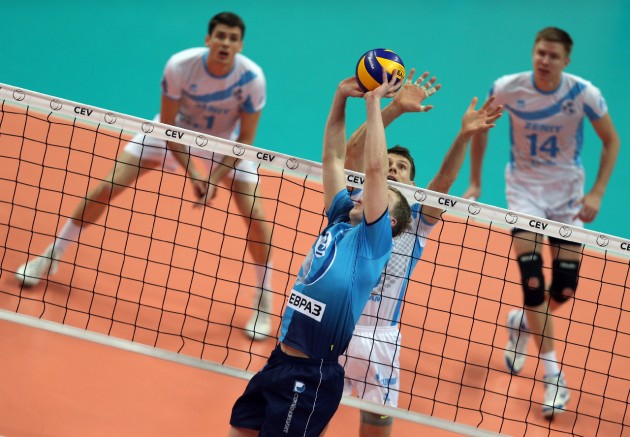 As they lost in straight sets (21-25, 14-25, and 20-25) to Gubernia, the Muscovites could not find a way to stop Nikolay Pavlov, the diagonal player of their opponents who actually last year had paced Dinamo to a memorable home win in the final match of the CEV Volleyball Cup against Poland’s Asseco Resovia RZESZOW. Pavlov played just superbly and practically killed every single ball by finishing the game with 21 points and 56% of efficiency in offense. On the other side of the net, youngster Egor Popov registered 13 points for Dinamo MOSCOW but this guy won’t star in the return match against Zenit KAZAN since he was not licensed for this year’s European Cups. The game with Gubernia turned into a very low-profile performance for the wing spikers of Dinamo – Bartosz Kurek, Leonid Shchadilov and Alexander Markin – whose efficiency stood well below 40%. Dinamo was evidently sidelined by the absence of their main opposite Pavel Kruglov who missed the game due to a knee injury.

“With Gubernia we had major problems in reception, and made some easy mistakes” said after the game head coach Yuri Cherednik. “Some players do not have enough character and this has an impact on the general performance delivered by the team. Of course the absence of Kruglov was to be felt, but our young opposite responded well, so our wing spikers are rather responsible for this defeat. I do hope we can change that negative course for the return match with Zenit KAZAN” the former Soviet star adds.

Dinamo KAZAN comes back from 2 sets...