Italy’s Copra Elior PIACENZA edged on Saturday Dukla LIBEREC 3:0 to make it to the final of the 2013 CEV Volleyball Challenge Cup – Men. The team captained by Hristo Zlatanov will be playing there Russia’s Ural UFA that needed a golden set to best Poland’s Delecta BYDGOSZCZ. 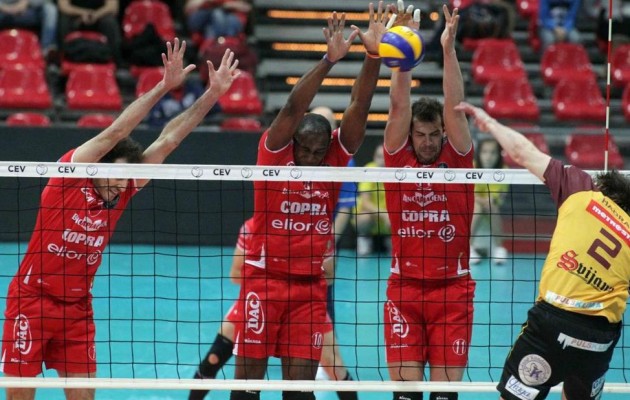 A total of 2,000 fans had got together on Saturday afternoon in Liberec to cheer on the home guys as well as watch out for the actions of the international stars included in the roster of Copra Elior. US American Maxwell Holt top scored in the end with 15 points with Zlatanov adding 13 to the count of PIACENZA. Lubomir Stanek paced Dukla LIBEREC in their losing effort with 7 points with Tomas Hysky and Ryan Burrow registering 5 apiece.

After missing the first game in Italy due to a knee injury, local setter Pavel Reznicek was back in action to be included in the starting six of the home side that included also opposite Jan Hadrava, middle blockers Adam Kaminski and Lubomir Stanek, outside hitters Hysky and Ales Spravka, plus libero Vaclav Koplacek. PIACENZA responded with setter Luciano De Cecco, opposite Alessandro Fei, middle blockers Holt and Robertlandy Simon, wing spikers Zlatanov and Samuele Papi, plus libero Davide Marra.

Dukla LIBEREC started out pretty well in the first set (7:5) but PIACENZA gradually found their best game to cruise to a comfortable 25-14. Dukla head coach Michal Nekola opted for changes in the second set with outside hitter Ryan Burrow joining the game and though the score remained a little close, still PIACENZA kept control of the operations to call for the 2:0 (25-20). The guests from Italy dominated the scene in set 3 going up 8:3 and 16:6 by the first and second technical time-out to cash a massive 25-13 to celebrate their second straight win in a few days.