With an hard-fought 3:2 win over host Galatasaray ISTANBUL, BUSTO ARSIZIO takes the bronze medal of the 2013 CEV Volleyball Champions League – Women. It’s the best result ever in the history of the Italian club. Best scorer of the match was Galatasaray’s Rosir Calderon with 30 points. 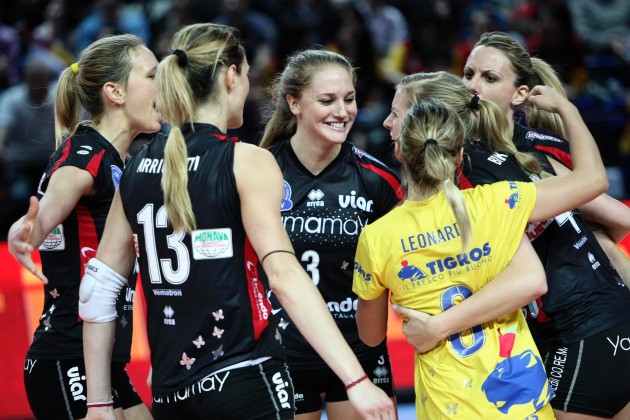 Like yesterday after the second set, BUSTO ARSIZIO head coach Carlo Parisi started with US-setter Carli Lloyd. There was nothing to separate the two teams in the beginning of the match. On Galatasaray’s side, power hitter Rosir Calderon and middle blocker Simona Gioli set the pace, whilst for the Italians Margareta Kozuch and Francesca Marcon displayed some blistering winners in the early stages of the starting set. At the first technical timeout, BUSTO ARSIZIO led by two points.

Leo Lo Bianca served an ace at 13-12 to turn the tables, followed by two block kills of Galatasaray’s Neriman Özsoy and Sinem Barut. At the second break, the hosts were four points ahead, 16-12. However, it was not good enough as the Italians bounced back with five consecutive points, particularly unforced errors from their opponents. In the crucial phase of the first period, Valentina Arrighetti hammered the Mikasa down to give BUSTO a two-point lead at 23-21. One rally later, Arrighetti added a service winner to bring up the first set ball for the Italians. Neriman couldn’t help her squad as her spike flew wide to offer BUSTO ARSIZIO the first set 25-21.

BUSTO’s Arrighetti and ISTANBUL’s Gioli were the principal scorers in the first set, with both players adding five kills to their personal statistics. At the start of the second set, the Italians tried to stop Gioli’s quick spikes with short serves. It seemed to work as Galatasaray head coach Massimo Barbolini had to call his first timeout already at 2-6. It didn’t help as in the middle of the second period, BUSTO ARSIZIO already led by seven points, 12-5. The Turks struggled with imprecise passing as setter Lo Bianca was everywhere but not at the net. However, Barbolini’s team managed to reduce the gap to five points at the second technical timeout. Nevertheless, the Italians never looked back to take a comfortable 2:0 set lead (25-15).

However, Galatasaray never gave up. Two sets down, the Turks showed great fighting spirit to bounce back bravely in the third set. Supported by their home fans, the Barbolini team managed to gain the momentum in the early stages of the third set. Still, a 12-8 lead was not enough to pull through. With five points in a row, BUSTO changed the course of the game again. At the second technical break, the Italians were up by one point. The set now balanced on a knife’s edge. Both teams were struggling with passing, but played well at the net. At 18-20, BUSTO ARSIZIO’s head coach Carlo Parisi called his players off court to have a serious talk. It helped as the red and blacks fought back courageously to level the game at 22-22. Nevertheless, the hosts kept cool with Gioli hammering for a well-deserved 25-23 set win.

BUSTO ARSIZIO regained momentum in the beginning of the fourth set. Kozuch and her teammates led 13-9, before the Barbolini squad started its comeback with seven (!) points in a row to make it 16-13 for Galatasaray at the second technical timeout. Maren Brinker turned the score around at 21-20 with a clever shot into ISTANBUL’s back row zone. Calderon immediately answered with some intense attacks from the left side to move the scoreboard in Galatasaray’s favor. To the delight of the home fans, ISTANBUL kept the upper hand in the crucial moments of the fourth set. Calderon closed it out at 25-22 to offer her teammates a fifth set.

Galatasaray ISTANBUL jumped out for an early 3-1 lead in the deciding set. Like in the fourth set, Gamze Alikaya replaced setter Lo Bianca for this essential phase of the match. Brinker reduced the gap to one point at 5-6, but Neriman hammered for a 7-5 Galatasaray lead. At side switch, the guests had a one-point advantage thanks to excellent block work of Arrighetti. There was not much to separate the two teams at that moment of the match. A Calderon mistake gave BUSTO ARSIZIO a small advantage at 12-9. It was enough as the Italians managed to pull through. Captain Christina Bauer concluded the hard-fought duel with a clever tip to offer her team the well-deserved bronze medals at 15-11.

CEV CL F: Carlo Parisi – “It was an excellent experience for my team”