Prostejov, Czech Republic, January 30, 2012. The clash with Turkey’s Fenerbahce Universal ISTANBUL scheduled for this Wednesday, February 1, is very much likely to be the last home match for VK Modranska PROSTEJOV in this year’s CEV Volleyball Champions League. 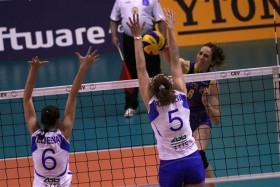 Fenerbahce is unanimously seen as one of the real pretenders for the trophy and so the Czechs have a very demanding task to cope with in the 1/8 finals of Europe’s most elitist competition.

If the Czechs scored a home win that would certainly be a major sensation.

Fenerbahce topped the charts in preliminary Pool B that included also the 2011 club world champions of Rabita BAKU while VK Modranska PROSTEJOV made it to the 1/8 finals at the very last moment as the fourth-ranked team with the best score across all prelim groups.

Fenerbahce is really strong and has been trying to seize that competition for the past three years, finishing second in 2010 and third last year.

However, VK Modranska does not want to surrender in advance and will play with glowing hearts as they did already last year while crossing their ways with Rabita BAKU.

“Everything is possible in sport” says head coach Miroslav Cada.

“The strongest side on paper can have a bad day while the outsider plays sensationally, so things can be turned around very quickly. We want to play good and show that we can compete at this level, even though we know that it is going to be an extremely difficult game with Fenerbahce” he adds.

“We have nothing to lose and we shall not be afraid of taking some risks” stresses captain Solange Soares.

“If we manage to score a home win, then Fenerbahce will feel much pressure for the return game in Turkey, so we shall give it a try. We have six players on both sides of the net and so we play equally. Last year we faced a similar situation and we eventually scored a home win over Rabita BAKU. We still owe much respect to Fenerbahce but shall not forget that sometimes the game unfolds in a totally different way than what was initially foreseen” says the Brazilian-born spiker.