Cairo, Egypt, January 30, 2012 - Algeria completed their preparation for the CAVB Women’s Volleyball Olympic Qualification tournament over the weekend after returning home from a two-week training camp in Turkey and are now set to host the tournament in Blida from February 2 to 4. 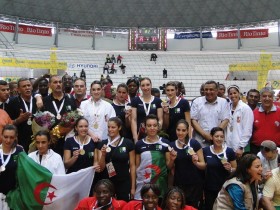 The side played four friendly matches across the fortnight and now have a ticket to the London 2012 Olympic Games in their sites after being touted as favourites to clinch top spot.

Led by captain Anissa Makhlouf the side will be aiming to participate in only their second Games after they debuted at Beijing 2008.

Yasmine Oudna, Melinda Hinnawi Raissa and Lydia Oulmou, all of whom play in France, will join up with the team later this week.

Standing in their way of an Olympic berth will be Kenya, Egypt and the Seychelles.

The technical meeting and the drawing of lots for the tournament is scheduled to take place in Algier a day before the tournament along with a press conference with the coaches.