CEV: Will Bank BPS Fakro repeat that same sensation it caused 2 years ago?

Muszyna, Poland, January 31, 2012. Bank BPS Fakro MUSZYNA caused quite a major upset two years ago as the team from a tiny village located in southern Poland edged France’s RC CANNES in the Playoffs 12 of the CEV Volleyball Champions League. 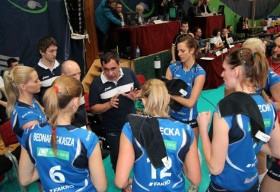 They will try to repeat that same performance this Thursday when it comes to the first round in the 1/8 finals of that same competition, once again testing the likes of the club from the French Riviera.

The year 2012 has so far turned into some kind of a disaster for MUSZYNA, as the team opened by losing in straight sets a match of the national league with Tauron MKS DABROWA GORNICZA and then suffered another defeat to Dinamo MOSCOW thereby losing the chance to finish first or second in the prelims of the Champions League and to get a good draw for the 1/8 finals.