Turkey’s Galatasaray ISTANBUL qualified tonight for the Challenge Round of the 2012 CEV Volleyball Cup – Women after downing, for the second time in the past 7 days, A.E.K. ATHENS of Greece in straight sets (25-10, 25-9, 25-20). 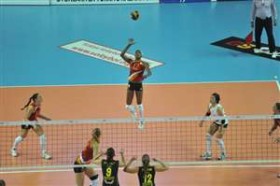 Easy win for Galatasaray in Athens

Ukrainian-born Natalia Hanikoglu stood out for Galatasaray in defense with a great 75% of efficiency while Hungary’s Katalin Kiss top scored for the home side with 8 points. The game was played in a fantastic atmosphere with some 3’000 fans in attendance who never stopped cheering on the home girls who were enjoying their first appearance in the quarterfinals of the European Cups.
In the next round Galatasaray will be playing a team coming down from the prelims of the 2012 CEV Volleyball Champions League, namely Crvena Zvezda BEOGRAD.