Dinamo MOSCOW joins the semifinals of the 2012 CEV Volleyball Cup after a splendid 3:0 away win in Greece (25-18, 25-21, 25-21) that backed up the same result scored a week ago in Russia versus the likes of Iraklis THESSALONIKI. 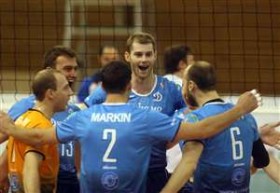 Dinamo takes spot for semis after second win over Iraklis

The guests from Russia’s capital city displayed a very solid performance and did not leave any real chance to the home side mentored by Sotirios Drikos. In the semis Dinamo will play the winner of the clash scheduled for Thursday and starring Acqua Paradiso MONZA of Italy and Remat ZALAU of Romania.
Three aces of Nikolay Pavlov contributed the 7:3 lead for Dinamo in the opening set and even though coach Drikos asked for a time-out at 17:11 for the guests, he could not stop the march of the group coached by former Soviet star Yuri Cherednik (25-18).
After trailing 2:5, Iraklis fought back to 5 all in set 2 but Dinamo displayed a good pace to move up 13:8. Iraklis was able to cut the gap to 3 points (20:17) but again MOSCOW was on a class of its own going for the provisional 2:0 (25-21). Iraklis stayed tuned up to 11 all in set 3 but Dinamo changed gear and finished it off in straight sets.
The best scorer of the game was Nikolay Pavlov with 21 points, while Peter Veres added 10 to the count of Dinamo; Andrej Kravarik and Rolando Despaigne contributed 11 apiece for Iraklis.
“It was a good game for us; we played with our hearts and heads up. Iraklis is a good team but we deserved these two wins” says Cherednik. “Dinamo was the better side but we have to continue our season, the goal being to take the national league and Greek Cup” states Iraklis head coach Drikos.