CEV CC: Unicaja Almería is eliminated in the golden set

Defeat was bitter for Unicaja Almeraí, it fell in the set of gold with a controversial decision what opted the game for Polish Tytan AZS Częstochowa, in the Challenge Cup. The game, in which Almeria gave its best all the time, was arbitrarily resolved rather than resolutely. 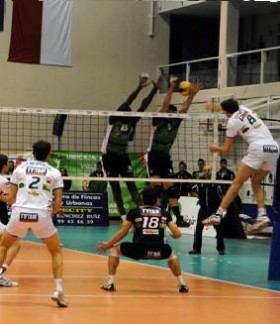 Unicaja Almería is eliminated in the golden set

The first set began with the domination of guests, especially with the strong service that was difficult to receive for Menzel and Ferrera, because of which they were dominating with six points until the first technical timeout  (2-8).

With the service of Pérez, they continued lowering the distance the with 5-0 partially (15-20), but the distance was already superior to gain in the set, so it took the guests to 18- 25.

Unicaja Almeraía showed the reaction, though it was late.

The situation changed in the second set and Unicaja, with the block of Chourio, began to dominate over Tytan (3-0).

The guests would not let it pass and were down only for one point (19-18), but there was a difference: Unicaja was into the game and continued to dominate the following moments (22-21) until it got three balls set by a direct service of Chourio, by which Salas gave a favor to Almeria (25-23).

The game was now intensified thanks to the merit and courage of the setter.

At the beginning of the third set Polish team dominated (2-4), but with a direct service of Menzel were only one point down (4-5), and so had to take the following measures  to the first technical timeout, where Ferrera’s failure put the guests ahead with two points (6-8).

The difference was changed with the  resumption and Tytan managed to intensify the play in the match in the final stages (20-20) where all an offensive deployment of both teams could be seen and where in fact, were the blockers who continued with the advantage that, due to an error in the Polish attack, left  Unicaja with two balls in set, of Viciana in service, precipitating in the rival’s  reception and Ferrera who was responsible for ending the third set for the host (25-22).

The fourth set could have everything, from the response of the guests to the rise in the game.

The team led by Mondi did not give up and continued facing the team of Kardos, although they took advantage in the final part (17-20) enjoying five points that were effective in the fourth set with an attack of Janeczek (21 – 25).

There could not be more excitement in the duel and Ruiz with a block put the result back on the scoreboard, but guests came to the final stages with the lead (9-10).

The golden set was more present than ever when Ferrera left Unicaja with three points in the set and he also was the one who finished it (15-12).

The moment of truth had come and although it seemed impossible if it was watched from the first set that had to be played, the golden set has showed to be the best with 15 points. A new game began.

The scoreboards in the opening of the match  showed  this result (10-10 and 12-12). The gesture at the end was not possible and after intensifying the game with 14, Tytan made good service which Ferrera , with a controversial action,  failed to receive in order to close the game in their favor of his team (14-16).

Bulgaria/Italy and Netherlands/Belgium to host next European...