After edging twice Russia’s Dinamo KRASNODAR in the Challenge Round, the ladies of 2004 Tomis CONSTANTA caused another sensation tonight in the first semifinal match of the 2012 CEV Volleyball Cup as they downed Turkey’s Galatasaray ISTANBUL in straight sets (25-23, 25-23, 25-21) to compensate for the defeat that the guys of Tomis CONSTANTA had suffered earlier in the afternoon in the semis of the 2012 CEV Volleyball Challenge Cup. The return is scheduled for Sunday, March 18, at 8 pm. 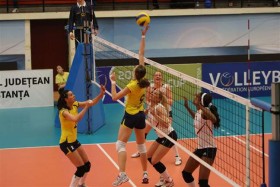 Romanian ladies cause another sensation by routing Galatasaray

“Galatasaray was a tough opponent for us but after defeating Dinamo KRASNODAR twice, we wanted to go for more” says home coach Darko Zakoc. “They are a strong team but tonight we did take profit of their weaknesses. If we play with the same attitude and quality also on Sunday, I think we have good chances to make it to the final” he adds.

“They have two outstanding players, Lo Bianco and Calderon, but I also believe we have good chances to advance to the final” says Tomis setter Diana Neaga. “The matches in the European Cups are always very special and I hope we can cause another sensation by beating Galatasaray also on Sunday”.

“Galatasaray has got a roster that includes many experienced players who are playing also for their respective national teams. I think they are stronger than Dinamo because they have a great setter, Lo Bianco, but we will give our best also in the return match and we’ll see what comes there in Istanbul” concludes Bulgarian middle blocker Tsvetelina Zarkova.