Sopot, Poland, December 7, 2011. Poland’s rookie Atom Trefl SOPOT could not celebrate a memorable home debut in the CEV Volleyball Champions League as the home heroines were downed in straight sets (15-25, 19-25, 23-25) by Russia’s champion Dinamo KAZAN in front of 3'241 spectators in attendance at “Ergo Arena”. 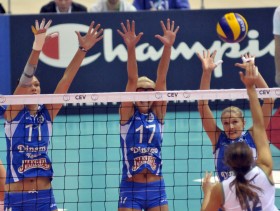 This is the second win in Pool C for the team from Tatarstan that last week had needed five long sets to edge the Czechs of VK Modranska PROSTEJOV.

Dinamo followed the Russian tradition by showing great blocking mainly via Regina Moroz and Maria Borisenko and SOPOT head coach Alessandro Chiappini was forced into an early time-out as his side was trailing 1:5. This did not change much and it was evident that Atom would not have had any chance by playing high, slow balls against the tall Russian middle blockers. Dinamo easily controlled the operations up to the end of the set wrapping it up at 15-25.

After going down 3:9, Atom Trefl stormed back to 9:10 in the second set but right after that Ekaterina Gamova took her side by the hand; Atom Trefl was able to hold off five set balls as the score stood at 14:24 before it ended up in a 19-25 for Dinamo.

Neriman Özsoy and Margareta Kozuch finally found their best play in set 3 and Russian mentor Rishat Gilyazutdinov even asked for a time-out. US American Megan Hodge anchored the home side and young middle blocker Maja Tokarska blocked a Russian attack to move the score up to 23:22 for SOPOT. However, Gamova was again unstoppable and she was able to finish the match in straight sets, top scoring with 15 points.

“Congratulations to the Russian team. I am sorry for this defeat in straight sets” says SOPOT leader Izabela Belcik.

“I thought we had already created the right team chemistry but it looks like we need some more time to finish that process”.

“I am happy because we played our best match of the season and took a very important win” adds Dinamo head coach Rishat Gilyazutdinov. In the next round SOPOT will play VK Modranska PROSTEJOV while Dinamo takes on Volero ZÜRICH.