Beograd, Serbia, December 7, 2011. The support of the many local passionate fans was not enough tonight as Serbia’s Crvena Zvezda BEOGRAD could not avoid a straight-set defeat to Scavolini PESARO (10-25, 23-25, 13-25) in the second round of action for Pool E of the 2012 CEV Volleyball Champions League. 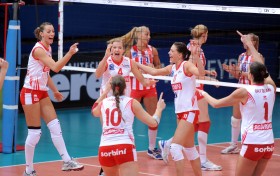 However, the Italians were not to stop as Maren Brinker and Berenika Okuniewska displayed some excellent Volleyball and Scavolini finished the set with an impressive 60% of successful attacks. PESARO opened the second set by setting a quick pace and Pavlicevic went for some more substitutions but without achieving the desired result. The Italians went up 16:13 and 21:19 before the home heroines drew level at 23. However, Okuniewska and Serena Ortolani scored the next two rallies for Scavolini thereby putting an end to the set. The guests totally dominated the scene in set 3 to clip the final 3:0 with Alexandra Klineman and Maren Brinker eventually top scoring with 15 and 14 points respectively.

Mina Tomic paced the home side with 6. “We served extremely well tonight and it was easy to defend because our block was always very well placed” states the mentor of Scavolini, Luciano Pedullà.

“We did not have any chances tonight but maybe the match could have unfolded differently if we had claimed the second set” stresses local head coach Ratko Pavlicevic.