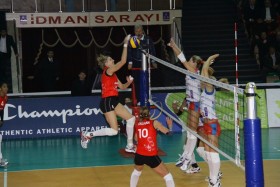 With this result Azerrail backed up last week’s victory over Romania’s 2004 Tomis CONSTANTA while the Italians suffered their second setback after losing in round 1 to Vakifbank TTelekom ISTANBUL.

Chiara Di Iulio opened strongly for BERGAMO (2:6) but Azerrail came back quickly to turn the score around by the first mandatory stop (8:6) to the delight of 2’500 fans. Polina Rahimova sparked problems across the Italian defense with her good serving and Azerrail rapidly moved the score to 16:9. Italian head coach Davide Mazzanti opted for some changes but Azerrail blocked with good consistency and an ace of Aksana Kavalchuk sealed the final 25-15.

The home side caught an excellent start in set 2 (8:2) anchored by the spikes of Rahimova, Anzanello and Kavalchuk. BERGAMO was able to score only three more points before the second technical time-out was called (16:5) but then stormed back to cut the gap (17:12). However, the hosts did not lose composure and with Heather Bown clipped the final 25-19.

The score stayed extremely close throughout the third set before BERGAMO went up 13:16 and maintained that margin of three up to the end (22-25).

“It was a very tough match for us. We were expecting a real battle even though our opponent looked a little tired” states the captain of Azerrail, Oksana Parkhomenko.

“We have to concentrate on our next matches and qualify for the next stage of the competition, this is our absolute priority” singles out Italian superstar Francesca Piccinini.