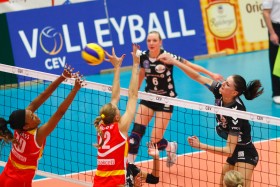 DRESDNER SC caught a good start in the match and went up 5:3, but the guests from Azerbaijan bounced back to lead 5:8 at the first mandatory stop. Rabita stretched the margin at the second technical time-out (10:16) but the German team around head coach Alexander Waibl fought bravely closing up twice (19:23, 21:23). Finally the world champions of Rabita used their first chance to wrap it up at 22-25.

Rabita literally dominated the scene in set two (4:8, 8:14, and 12:20). In the mid of the set superstar Natalya Mammadova joined the match after missing the start of the season to nurse a shoulder injury and she helped her side move the count to the provisional 0:2.

The home fans pushed DRESDNER SC in set 3 but Rabita was stronger. After 80 minutes the game was over but the spectators that had found their way to the “Margon Arena” stood up to clap passionately for their heroines.

Anne Matthes top scored for the home side with 14 points while Kimberly Glass and Natasa Osmokrovic totaled 12 for Rabita.

“We are not surprised about our first two upsets in this competition. My team did a good job against the stars from Baku” says DRESDNER SC head coach Alexander Waibl.

Next week the German team will host ASPTT MULHOUSE of France that has also a 0:2 win/loss record after the first two rounds of play.