Prostejov, Czech Republic, December 7, 2011. VK Modranska PROSTEJOV suffered tonight a home defeat to Switzerland’s Volero ZÜRICH in the second round of play for the prelims of the 2012 CEV Volleyball Champions League – Pool C. 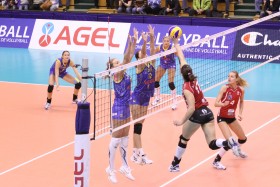 Volero performed well tonight and got the right boost after claiming a very close first set, where the guests cruised past at 18:17 before stamping the final 25-21. Volero dominated the game in set 2 but then suddenly slowed down its tempo in the third set before they got back on track to seal the final 1:3 with a great contribution stemming from Brankica Mihajlovic. Even though 500 fans were there to cheer on the local girls and Helena Horka displayed a solid performance, still Modranska could not celebrate a happy end.

“Congratulations to our opponents. Tonight they really played well and we could register some good figures only in serving and setting. There was a huge difference between the teams, especially in blocking, and their setter mastered very well all their attackers” says Czech head coach Miroslav Cada.

“It was supposed to be a different match but we played very bad. Our opponents were solid and they were well ready also tactically speaking” stresses Solange Soares of VK Modranska.

“We had a good approach to this match, emotionally, physically and tactically. The complete team performed well tonight and I am not speaking only about the starting six as our back up players did also help much in fine tuning the preparations” singles out the mentor of Volero, Svetlana Ilic.

“We had a great start and our first two sets were just great. However, we made many mistakes in set 3 and our blocking was not that solid anymore. However, we stuck to our tactics and it finally worked” concludes Volero captain Mandy Wigger.