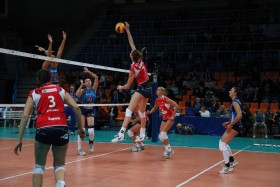 Dinamo started pretty well by claiming the opening set before being sidelined by many errors in defense as the second section of the game was taken by the guests from Poland. Dinamo got back on track in set 3 but eventually lost the next two with the game ending in a 2:3 defeat for the real disappointment of the fans in attendance at “Druzhba” sports hall.

Serbian Vesna Djurisic, who is currently playing for MUSZYNA, said: “We started badly and especially our reception was weak. We also did not put enough pressure with our serving but finally we took the game and we are very happy, also because our President had come to Russia to cheer on us. It was a difficult and important game and we are pleased to have beaten Dinamo”.

“This is our second defeat in the Champions League and the quality of our play is really bad at the moment. It is up to us now, as we can get together to stop losing or we can start criticizing each other, but this will not help, as we shall first behave as a team” says local mentor Boris Kolchin.