Moscow, Russia, December 8, 2011. Poland’s Bank BPS Fakro MUSZYNA will be fighting tonight in Russia’s capital city to go for the maximum goal, i.e. to take three points from the match with Dinamo scheduled for the second leg of the 2012 CEV Volleyball Champions League. 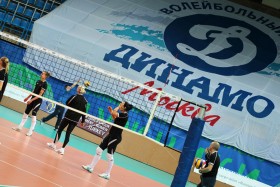 “Dinamo is a guarantee of quality already in its name. This is a world-class opponent whose roster includes some of the best Russian players. We have already played Dinamo in the past and we did not take any set, so I hope we’ll change that negative trend tonight” says the head coach of Bank BPS Fakro, Bogdan Serwinski.

MUSZYNA traveled to Moscow without Anna Werblinska (Baranska) who is still injured.

“Anna stayed in Poland because she needs some more days to recover after she strained a muscle. We came to this decision and I think this is the best for her as well as for the team. She will be fit soon and ready for the next matches” adds Serwinski.

The players of Bank BPS Fakro have already practiced two times in Moscow (see picture) and they appear on a good route to go for the best result.