Munich, Germany, December 8, 2011. With the important match for the prelims of the 2012 CEV Volleyball Champions League against Jihostroj CESKE BUDEJOVICE just around the corner, Germany’s Generali UNTERHACHING is really not to stop in domestic competitions. 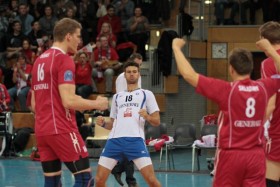 The tenth win in the Bundesliga in as many games plus a win in the opening round of the German Cup makes it eleven victories straight now versus national opponents for UNTERHACHING.

Number twelve is supposed to follow on Saturday when the three-time and defending German Cup winner hosts BERLIN for the quarterfinal-match of its favorite competition. Considering Generali’s current level of play the team from the German capital seems to be in for another short night like last Thursday when the Recycling Volleys lost at home to an inspired UNTERHACHING side.

Generali recently put up another breathtaking display of its capabilities by playing Mitteldeutschland. And again, Paduretu could do nothing but praise his players.

“We were very good as a team; we didn’t give our opponent any chance at all. I’m very pleased”, he said.

Though the coach mixed it up a lot and gave his reserves like Robert Hupka and Huib den Boer a chance to show their skills Generali was on cruise control for the whole match and never in danger to even lose a set. Especially UNTERHACHING’s offense proved to be too much for their opponent.

Christian Dünnes and Denis Kaliberda, who seems to have overcome some shoulder problems, almost scored at will.

“Christian was as good as ever and Denis did very well, too. He’s getting back to his old strength”, Paduretu said. However, it was libero Sebastian Prüsener (see picture, with captain Max Günthör, left, and Brano Skladany, right) who had an even better game and therefore was voted MVP for the second time this season.