Cyprus, Luxembourg and hosts Scotland posted maximum points with straight sets victories on the first day of action for the final round of the 2012 CEV Junior Volleyball European Championship – Small Countries Division. 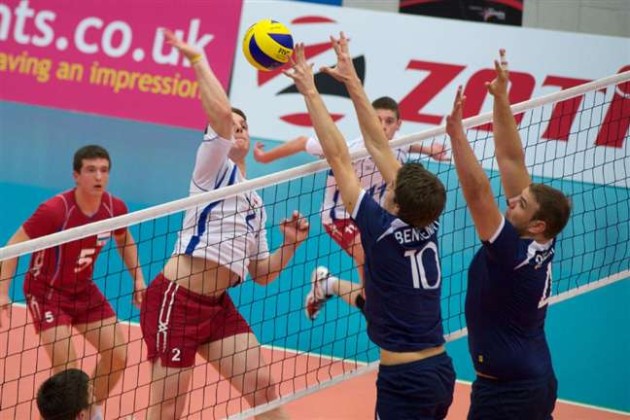 Cyprus showed their class with a comprehensive 3:0 victory over first-time finalists Ireland in the opening game. Wing spiker Giorgios Moschovakis led the way for the Cypriots with 12 kills and three blocks but was ably assisted by diagonal Anastasios Stylianou with six kills for a speedy 3:0 (25-9; 25-7; 25-11) win.

The only blot on the landscape for Cyprus was an ankle injury sustained by setter Kostas Kalafatis that puts his participation in the key game with Luxembourg in doubt.

San Marino and Luxembourg served up a cracker in the second match of the day, with both teams throwing caution to the winds in a dynamic and expansive offence.

The key to the 3:0 win for Luxembourg was a nine kill, three block game from Chriss Zuidberg backed up by the great defense of libero Tycho Eichstädt.

San Marino shone in spells though and led 23:21 in the third set before Luxembourg’s aggressive block negated San Marino’s offence. Luxembourg coach Dieter Scholl reflected: “It was good to secure a victory today, as there are a number of dangerous teams in this competition, and we must be at our best at all times. I thought that the first two sets showed us at our best, but we learned in the third set that we cannot give away any advantage. I was delighted not only to win the third set having been behind, but at the manner in which we fought back from 23:21 down”.

The final match of the day paired Scotland with Northern Ireland, and Scotland led the way from the first whistle, wing spikers Ross Kirkwood and Scott Wilson set the pattern with a composite +23 hitting game to score a 3:0 (25-17; 25-13; 25-15) victory.

How to Design a Resistance Training Program for Your Sport