Ireland’s juniors kicked off yesterday their first campaign in a final round of the CEV Volleyball European Championship – Small Countries Division with a 0:3 defeat (9-25, 7-25, and 11-25) to tournament pre-favorites Cyprus. 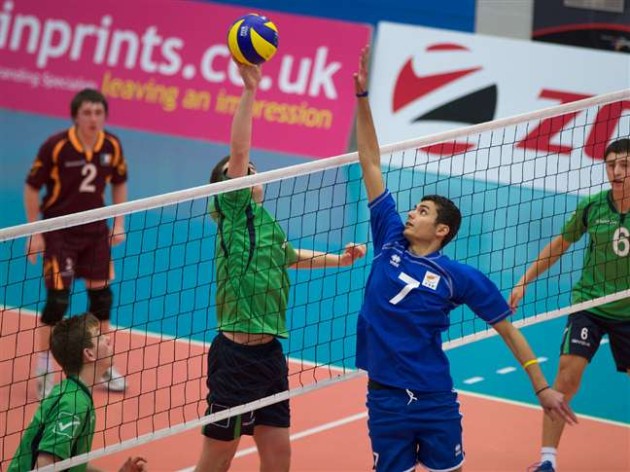 “It was our first game at this level so we knew that we had to start somewhere” reflects head coach Laurent Cauet. “There was a clear gap between the teams as Cyprus is considered to be one of the tournament favorites. The good thing on our side was that we responded to the challenge and we did not give up. Our heads did not drop and we fought for each ball. This can be seen in the third set as we were leading 8:6 going to the first technical time-out. This showed me that we can raise our game and that we have more to offer”.

“We need to be more consistent” continues Cauet. “When our heads are down we tend to lose 2 or 3 points in a row which makes it easier for the opposition. But overall I am very happy with the performance and it was important for everyone to have court time today, and I am very happy with their response. For the next game we will need to show progression. Sometimes we tend to drift from the game plan and we play too fast under pressure. We need more people to create more options for the setter”.

Ireland’s team captain Luke Uniacke reveals what he was feeling as the Irish national anthem was played for the first time at a final round of the European Championship. “First of all, I felt passion. The feeling was amazing. I did an interview before where I stated that my best moment on a court is when they play the national anthem. I was a bit ahead of everyone else and a bit out of tune. But when they played it I had goose bumps and was buzzing at the start of the match”.

When asked about the team’s performance, Unaicke felt that they played ok. “There were some good points and some negative. We have dusted off the cobwebs but we have no excuses. We only played at about 60%. We have a lot more to give”.