After losing its first 1/4 final match in the Playoffs of the Bundesliga SCHWERINER SC stormed back from two sets down (23-25, 22-25) in the return game with VfB 91 SUHL to qualify for the semis of the national league and challenge there the archrivals of Rote Raben VILSBIBURG. 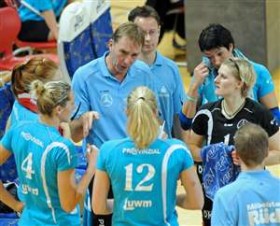 The second game against the side mentored by the assistant coach of Germany’s national team, Felix Koslowski, turned into a real thriller as VfB 91 SUHL could not capitalize on three match balls in set 3 and SCHWERINER SC fought back to seal it with the score of 28-26 and re-open the fate of this series.

After that, the home heroines captained by Julia Retzlaff did not find any resistance on the other side of the net and wrapped it up by seizing set 4 as well as the tie-break with a comfortable margin (25-13 and 15-9).

A golden set was to be played to determine the semifinalist of this year’s Bundesliga and VfB 91 SUHL enjoyed quite a good omen after having already pocketed that additional, deciding set while playing Switzerland’s Volley KÖNIZ in the 2012 CEV Volleyball Challenge Cup.

SCHWERINER SC started strong there to the delight of 1’300 home fans but had to divert another match ball for SUHL before sealing this long affair with the score of 17-15.

The girls of VfB 91 SUHL were left in tears at the end of this incredible game while their assistant coach Andreas Burkhard stated that “it is not a shame to lose against SCHWERINER SC”.

The next opponent for the players around head coach Teun Buijs will be Rote Raben VILSBIBURG. This will be the fourth time these sides cross their ways this season after the Bavarians claimed their home match of the regular season with the score of 3:1 while one week before the final of the national cup SCHWERINER SC got its revenge at the end of a hard-fought battle (3:2; 25-14, 21-25, 22-25, 25-18, 15-8).

This past March 4 SCHWERINER SC edged Rote Raben in front of 10’000 fans at “Gerry Weber Stadion” in Halle/Westfalen to claim the national cup for the fourth time in the history of the club from the capital city of Mecklenburg-Vorpommern.

As per the words of Rote Raben head coach Guillermo Carlos Gallardo, SCHWERINER SC is somehow under pressure now as everyone expects this side to make it to the final of the Bundesliga.

However, SCHWERINER SC is confident after having come out of this terrific battle with SUHL and having still good memories from last year’s semis where Retzlaff and her mates beat Rote Raben twice – and losing only one set – to advance to the last stage of the competition.