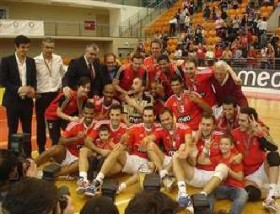 A minute of silence was observed before the start of the match to commemorate Marco Ruel, the captain of AD MACHICO, i.e. another side competing in Portugal’s first division, who had prematurely passed away this past March 27.

AA ESPINHO started the match pretty well pressuring SL BENFICA with their service and killing some great blocks to set the pace of the game at both mandatory stops (8:5, 16:12).

They controlled the operations up to the end of the opening set that was sealed with the score of 25-21. The story of the game changed quite dramatically in the second set where SL BENFICA opened with a massive 7:2 break to play with great confidence and a fast tempo that did contribute a terrific 25-12.

The third set was initially pretty close with ties at 5 and 10 but SL BENFICA gradually widened the gap with good blocks and powerful spikes to call for the provisional 2:1 (25-16).

Some tension was to be perceived in the opening phases of set 4 as AA ESPINHO did realize this was going to be their last chance to prolong the game while SL BENFICA was evidently looking for a quick and happy end of this match. BENFICA steadily got to the front (8:5, 16:9) and after claiming a margin of 10 points (21:11), the fate of the game was already determined with BENFICA finishing it off at 25-15.

Flavio Cruz paced the winning side with 13 points while Fabricio Barros of AA ESPINHO top scored in the final with 14.

“Our opponents started the match very well while on the other side my guys struggled to find their rhythm and made many mistakes, especially in defense” stated head coach Jose Jardim after the final whereby he claimed a fifth title in this competition.

“They got the right boost of confidence and could claim the opening set. Afterwards we did a good job especially with our service, as we were quite aggressive in this fundamental and could hence avoid their side-out with our block being always well positioned. Finally I would like to stress that the final of the national cup is always a great Volleyball party for all involved here in Portugal”.