The young ladies of Cyprus downed Luxembourg in straight sets (25-20, 25-16, and 25-15) in about an hour to earn the crown of the 2012 CEV Junior Volleyball European Championship – Small Countries Division as the tournament came to a close on Sunday in Limassol. 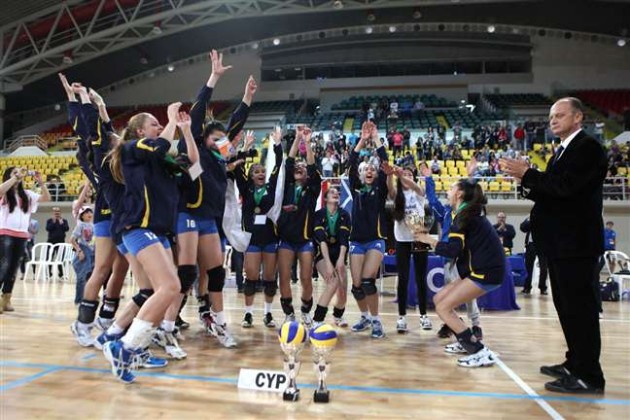 But the thrashing victory of Cyprus (which was the first ever victory over Luxembourg in their head-to-heads at junior level) not only dethroned Luxembourg from the top position which the Grand Duchy had monopolized ever since the inaugural edition of the Championship dating back to 2006, but sent them crashing to third place as Scotland emerged to claim the silver medal.

Cyprus needed just two sets to win the title and completely overwhelmed the defending champions from the very beginning, leading the score throughout the match.

“We were extremely disciplined in our tactics today”, said the head coach of Cyprus, Manolis Roumeliotis after the deciding match.
“Congratulations to my players for their steady performance throughout the tournament”.

“The future looks good, as long as we don’t neglect it” added assistant coach, Petros Patsias. “It’s time to show that we have faith in our younger players and I’m sure they won’t disappoint us”.