Russia and Romania set the tone for the opening day of the second-round qualifier to the 2012 CEV Junior Volleyball European Championship – Women taking place at “Sala Polivalenta” in Piatra Neamt by routing their opponents, Greece and Portugal respectively, in three straight sets. The first day of action there was rounded out by Finland’s win over Hungary, this time with the score of 3:1. 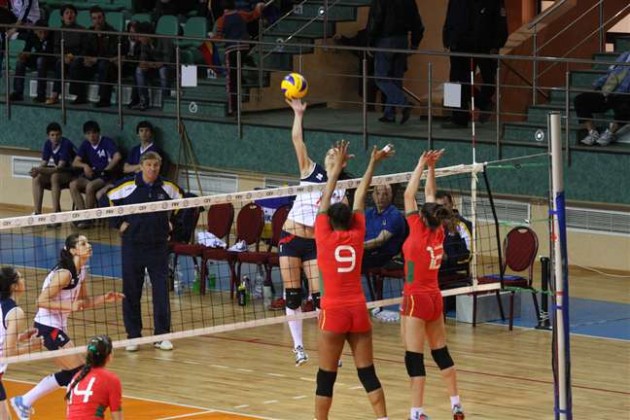 Actually Greece had caught a good start by going up 8:4 in the opening set anchored by its opposite Anthi Vasilantonaki before Russia stormed back supported by great blocks killed by Ekaterina Makarchuk and some splendid attacks finalized by outside hitter Kseniya Ilchenko.

Russia was already dictating the tempo of the game by the second technical time-out (16:13) and although Greece fought bravely, the set was sealed at 25-20.

Russia was absolutely one of a kind in set 2 with Makarchuk and Anna Luneva anchoring its offense; the gap was steadily widened by the Russians (8:5, 16:9) who could finalize their quest with a massive 25-10. After such a cold shower, Greece found its way back into the game with Vasilantonaki and could even claim the leadership at the first mandatory stop (8:6).

Russia responded with middle blockers Luneva and Makarchuk well mastered by setter Elena Novik but it was chiefly outside hitter Ilchenko who took her side by the hand; in spite of this, Greece had a couple of set balls at 24:22 before running out of fuel, with a series of silly errors paving the way for the final 26-24 and 3:0 for Russia.

Romania started a little too relaxed and was trailing 6:8 in the opening set before fighting back with middle blocker Iuliana Matache and wing spiker Cristina Cazacu that contributed a margin of 6 by the second technical time-out.

Portugal tried to resist to that storm but could not do much to avoid the final 25-15. Things were even easier for Romania in set 2 (16:7) and even though Beatriz Santos scored some good points for Portugal, the final score (25-13) was more than clear about the supremacy of the home side.

The history of the match did not change in set 3 (8:3, 16:6 for Romania) with Matache, Cazacu and middle blocker Andra Lidia Stresina sealing it with another 25-13.

The last match of the day ended in a 3:1 win for Finland against Hungary (25-21, 25-20, 20-25, 25-21). This game was played with glowing hearts by both sides, with Finland standing out with the excellent blocks provided by Roosa Laakkonen to pressure Hungary’s spikers.

Hungary responded with a well organized defense but still Finland was not to stop and could pocket the opening set with a 25-21.

The “Suomis” controlled the game all the way through in set 2 (8:6, 16:12) and once again it was Laakkonen with her blocks and attacks that set the tone for the girls from the North (25-20).

Hungary fought back bravely in set 3 with opposite Bettina Ilyes contributing some good points for her side that could pace the game at both technical time-outs (8:5, 16:8).

Finland tried to resist but this time it was Hungary that cruised away for the final 25-20. Finland did not want to risk a tie-break and hence Laakkonen and Saara Lepistö played with great intensity in set 4 to eventually finish it off at 25-21.