The second round qualifier – Pool A for the 2012 CEV Junior Volleyball European Championship – Women started on Wednesday at “Olimpiets” sports hall in Mogilev with a couple of speedy wins for Germany and the home heroines of Belarus, while the last match on schedule turned into a little closer affair with Poland eventually edging France. 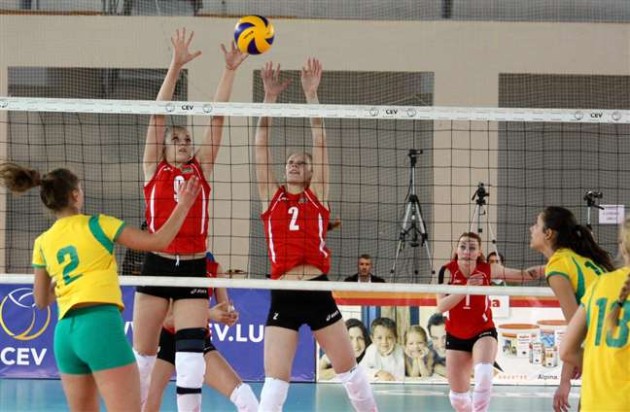 Germany opened the program in Mogilev by downing Latvia in three straight sets (25-12, 25-7, 25-15) by displaying a very solid defense and some great actions in offense. Magdalena Gryka was certainly one of the most outstanding players on court as she basically destroyed her opponents with her solid service.

A total of 700 fans got together for the debut of the home heroines that played their neighbors from Lithuania. Belarus delighted the audience with a speedy 3:0 win (25-19, 25-22, 25-16) with Volha Lazitskaya pacing the home side by scoring a total of 19 points. The next opponent for the local favorites will be Poland, definitely a much stronger side than Lithuania to cope with.

Today’s program was completed by Poland and France with the fans and the foreign coaches that were expecting a long and tough match. This was the case only in the opening set where France went up 16:13 paced by Elisabeth Fedele and Safiatou Zongo before Poland stepped up to pocket that section of the game 25-18.

The girls in red and white jerseys could re-assert their supremacy also in set 2 and 3 even though the score line was not as clear as in today’s previous matches (25-20, 25-16). “Last year we crossed our ways with France in the prelims of the Youth European Champs but the group has turned into a much stronger side in the last months” said Poland’s head coach Andrzej Pec. “We expected a tough game and so it was. Anyway this is just the start of the tournament, so we need to stay focused for the next matches”.

“We started well and were leading the score but suddenly started making stupid mistakes and we gradually lost our rhythm” adds France’s mentor Jacques Beraud. “This is something you cannot afford while playing a solid opponent like Poland. Everything was decided at the end of the first set. I am really disappointed because I expected a different match”.