Turkey, Germany and Latvia opened their campaign in the second round qualifier – Pool D for the 2012 CEV Junior Volleyball European Championship – Men by scoring convincing wins on Wednesday at “Baskent” sports hall in Ankara. The hosts delivered a great show by downing Austria in straight sets whereas Germany and Latvia needed four sets to edge Slovakia and Portugal respectively. 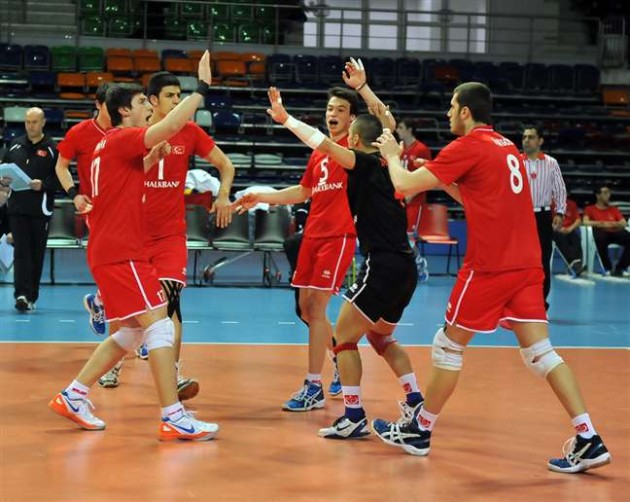 The guys from Riga started off quite strong setting the pace at both mandatory stops of the opening set (8:6, 16:12) to keep full control of the operations to go for a speedy 25-14.

The game was sealed by Latvia with the score of 3:1 after clawing back from 5:8 and dominating the scene for the remainder of set 4 (25-18). Latvia’s opposite Reinis Pekmanis paced his side with 25 points while outside hitter Jose Gomes top scored for Portugal with 15.

Even though Germany caught a good start (8:3), Slovakia turned the charts around by the second technical time-out of the opening set and eventually pocketed it with the score of 22-25.

The Slovaks stretched that good tempo also to set 2 going up 8:5 and 16:14 before Germany could find its way into the game to seal that section at 25-21. Germany asserted its supremacy all the way through in set 3 (25-19) and after trailing 6:8 did the same in the fourth set claiming a margin of 3 at the second mandatory stop and finishing it quite comfortably with a 25-17.

Outside hitter Ruben Schott paced Germany with 17 points while 13 more – including 6 blocks – were added by middle blocker Florian Hecht.

Turkey rounded out today’s program with a speedy win in straight sets to easily down the young guys from Austria (25-15, 25-16, and 25-22). After a close start, Turkey unleashed its full potential by profiting of some good serving provided by team captain Burak Güngör (16:8) thereby paving the way for a massive 25-15.

The plot did not change much in set 2 where Austria stayed tuned up to the first mandatory stop but afterwards Turkey sailed away (16:10) to go for another comfortable 25-16.

Things were a little different in set 3 where Austria went up 8:7 and was trailing only by one point at the second technical time-out before Turkey changed gear in the money time to go for the final 3:0. Burak Güngör top scored for the home side with 13 points including an ace while Lorenz Koraimann scored 9 for Austria.

Italy and Bulgaria hosts of the ECH...