The hosts of Slovakia, the Netherlands and Austria started their campaign in the second round qualifier for the 2012 CEV Junior Volleyball European Championship – Women which is taking place in Bardejov all by scoring straight-set wins. The home heroines of Slovakia beat Switzerland, while the Netherlands edged Bulgaria and Austria downed Azerbaijan. 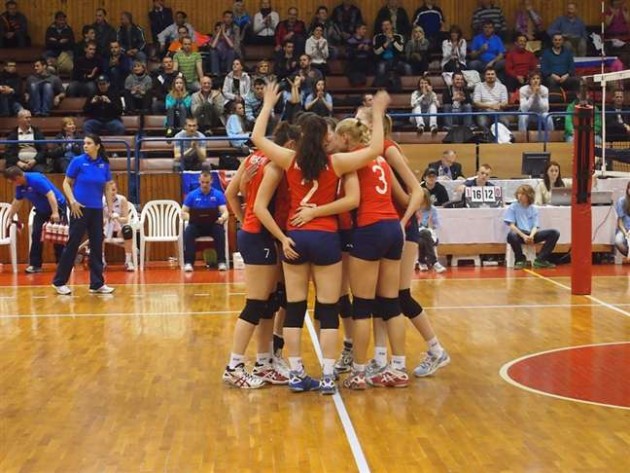 The Netherlands fought back with their opposite Celine Keijsers to draw level before Bulgaria dissipated two set balls as the score stood at 24:22. After a very close run and with both sides displaying some good Volleyball, Holland seized that section of the game with an ace of Annelies Dokter (29-27).

Once again Bulgaria dictated the pace of the game in set 2 (8:6) but the Dutch girls clawed back again to go up by 2 points at the second mandatory stop. On the other side of the net Bulgaria did gradually lose composure with Holland sailing away 20:15 and 23:16 and able to stop a late comeback of their opponents who were for a while well supported by the service of Petya Barakova (25-22).

A similar scenario unfolded in set three with Bulgaria opening with a solid 6:2 before the Netherlands leveled at 8. The “Oranjes” changed gear after the second technical time-out and eventually cruised to a well deserved win in straight sets (25-20).

Jana Braakhuis totaled 12 points for the Netherlands while Gergana Dimitrova top scored in the game with 13. “We fought very well, but we lost a close first set and our morale went down. We tried to come back but we were not able to do it. It was just the first game and we have four more to come” said the head coach of team Bulgaria Radoslav Bakardzhiev.

“The first set was very difficult, our middle-blocker Lynn Blenckers made three good services and they made some easy mistakes and helped us come back. We were very nervous, we made a lot of mistakes that we normally don’t do. We won the first set with some luck and then we got the right confidence and we played a little bit better. To win the opening game 3:0 is very good for the atmosphere in the team and we are looking forward to the next matches” singled out Dutch head coach Matt van Wezel.

In the second match of the day the home heroines of Slovakia downed Switzerland in straight sets too (29-27, 25-20, 25-19). The first set was very close. Slovakia’s girls supported by their great fans went up 24:22 but they did not capitalize on this advantage and Switzerland leveled the score. Such a dramatic first set was eventually closed by home favorite Dana Sipkova with a block (29-27). It was a big boost of confidence for Slovakia and the young girls from the hosting country started playing better. They served very well and also played good in defense, claiming the second set with the score of 25-20. However, the young players from Switzerland didn’t give up, they fought very hard, but it was not enough. Slovakia was better also in the third set and opposite Nikola Pistelakova ended the match with an ace. Slovakian spiker Miroslava Rehakova was the best scorer of the match with 16 points, while Swiss captain Laura Caluori and Elena Steinemann totaled 11 apiece.

In the last match of the first day Austria – a little surprisingly – routed Azerbaijan in straight sets (25-23, 25-22, 25-21). The Austrian girls played very bravely, they were dangerous especially in serving while their opponents had a lot of problems in reception. Austria claimed the first set 25-23 and continued in good display also in the next section of the game, and especially spiker Srna Markovic was very successful in attack. The players from Azerbaijan were not able to find their rhythm: they produced a lot of mistakes under the pressure put by their opponents, so Austria pocketed the second set 25-22 and the third 25-21 to go for the final 3:0. “We didn’t expect this result; we just believed that we can go for it. We were fully focused on our play. All sets were very close, but I think we showed more fighting spirit today” said the head coach of team Austria Li Qing.

CEV junior M: Italy comes back from two sets down to open second round qualifier in Bar