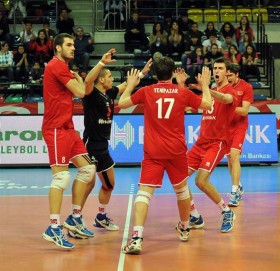 Germany and Austria, ranked second and third respectively, will have an additional chance to book their pass in early July when it comes to the third and last stage of the qualification process.

Since Turkey and Germany had claimed all of their previous matches, the result of this clash was going to attribute the sole ticket at stake to advance directly to the final round of the competition.

Turkey opened right from the start with a good pace playing aggressively and blocking really well to go for a comfortable 25-16. Germany turned the tables around in set 2 setting the pace all the way through there (5:8, 11:16) with middle blocker Friederich Nagel killing a few blocks in the last and deciding phases (16-25).

The score remained extremely close in set 3 with Germany that was eventually able to have the upper hand after an exciting final rush (24-26).

Turkey stepped up in set 4 anchored by their captain Burak Güngör (8:5, 16:8) to call for the tie-break (25-16). The local favorites opened there with a great 5:2 but Yannick Harms towered with his blocks to move up his side (7:8). The final section of the tie-break was a real thriller with both teams displaying some great Volleyball out there on the court before Turkey could finally celebrate its win (20-18) at the end of a game whose best scorer was opposite Emre Senol with 19 points.

Austria, the real sensation of this tournament, opened the program on Sunday by scoring its third win in Ankara downing Latvia with the score of 3:1 (25-13, 22-25, 25-13, and 29-27) to finish its campaign in third place and advance to the next stage of the qualification process that is slated for mid July.

Austria started out strong with a massive 8:1 helped by the service of setter Florian Ertl and totally dominated the scene (16:6) to go for a speedy and comfortable 25-13.

Austria stretched that good tempo also to the opening phases of set 2 (8:3) but Latvia closed the gap and eventually stepped up to call for the provisional 1:1 (22-25).

Austria regrouped in set 3 going up at both mandatory stops (8:3, 16:9) with middle blocker Lukas Doboczky showing some great skills in offense and paving the way for the final 25-13. Austria trailed by both technical time-outs of the fourth set (6:8, 14:16) but eventually stormed back to stop the Latvian comeback after a very close final rush (29-27).

Outside hitter Anton Menner top scored for Austria with 19 points, two more than those contributed by Lukas Doboczky.

Slovakia completed its campaign in Ankara by edging Portugal 3:1 (22-25, 25-21, 25-23, and 25-23) to finish in fourth place thereby missing the opportunity to advance to the next stage of the qualification process to the 2012 CEV Junior Volleyball European Championship.

Slovakia started pretty well setting the pace at both technical time-outs of the first set (8:6, 16:15) but Portugal did accelerate down the stretch to go for the final 22-25. Slovakia repeated the same plot – exactly with the same scores – in set 2 but this time extended its dominance up to the end (25-21). The same scenario unfolded in set 3 and 4 with Slovakia wrapping it up with a double 25-23. Outside hitter Hugo Oliveira of Portugal top scored in the game with 20 points including 4 blocks.