Mogilev, Belarus, April 15, 2012. After claiming its pass for the final round of the 2012 CEV Junior Volleyball European Championship on Saturday, the girls of Poland’s national team completed their campaign in Mogilev with a perfect record by downing Latvia in straight sets (25-11, 25-19, 25-17) in their last match of the qualifier that ran throughout this week at “Olimpiets” sports hall. 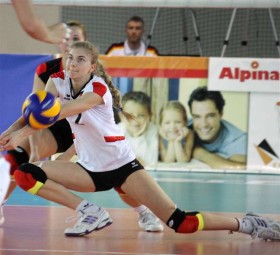 The second match on schedule was more important as the home heroines of Belarus needed to score a win to maintain some chances to advance to the third and last stage of the qualification process.

The home girls had a disastrous start and quickly lost the opening set to Germany whose setter Magdalena Gryka was simply outstanding. Belarus moved up 16:10 in set 2 but a serving turn of Germany’s captain turned the tables around and the guests finished it with a block.

The third set was a real fight with Germany’s head coach Han Abbing being forced to use his best attacker, Carina Aulenbrock, but in vain as the hosts could seal it at 26-24.

The game, however, was no longer in the hands of the local heroines in set 4 as their poor reception minimized their chances to score with consistency and Germany could go for the final 3:1. In the last match of the tournament France easily disposed of Lithuania in straight sets (25-10, 25-11, and 25-18) to finish third in the standings and advance – together with Germany – to the third round qualifiers (venues to be determined) scheduled for mid July.