Nova Gorica, Slovenia, April 15, 2012. The home girls of Slovenia provided the local fans in Nova Gorica with a special joy as this afternoon they booked their ticket to the final round of the 2012 CEV Junior Volleyball European Championship that is scheduled for mid August in Ankara, Turkey. 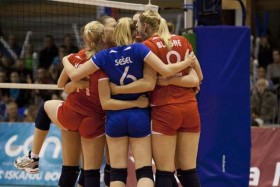 Croatia and Belgium finish second and third respectively and will try to book their pass via the third-round qualifiers that are slated for early July (venues still to be determined).

Croatia caused the first sensation of the day on Sunday by edging Spain 3:1 (25-21, 14-25, 25-23, and 25-19) to finish its campaign in second place and leave the Spaniards – who had traveled to Nova Gorica with very high expectations – in tears as they are finally out of the competition and won’t have any second call in July.

However, the real highlight of the day was the game played by the home heroines of Slovenia with Belgium.

“We are absolutely thrilled with this win as we wanted it so much to finish first in our group” said home coach Bruno Najdic.

“We were a little nervous as we knew we had a unique opportunity to qualify for the final round; we had our ups and downs but after these five matches I can only say that I am proud of my girls who have showed some great play and real character here in Nova Gorica. If we have a look at the future perspectives, I think that Slovenia shall really invest in this generation. They have great qualities, in and off the court, this is a strong group, with close human bonds, and we have showed it there after we were assigned to a very difficult group including Spain that last year had finished among the top eight at the Youth European Championship. So once again my thanks for their desire to win, fighting spirit and great quality of play” he concluded.

At the end of the day with no real influence on the final standings as the tickets for the final and third qualification round were already assigned, Ukraine downed Sweden in three straight sets (25-16, 25-20, and 25-19).