Ankara, Turkey, May 3, 2012. Turkey emerged as the big winner of Pool I at the 2012 Olympic Games - European Qualification for women after securing a third victory in a row, this time by 3:1 (18-25, 25-16, 25-23, 30-28) in a spectacular match against Germany. The second semifinal spot from this pool remains wide open and will be determined by the outcome of the last match tomorrow – Germany vs. Bulgaria, with the winner joining Turkey and Poland among the top four teams of the tournament. 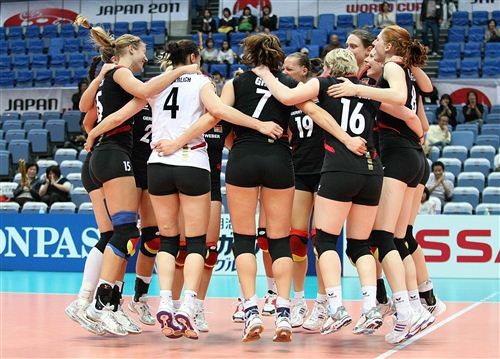 Germany was in complete control of the first set. Giovanni Guidetti’s players did not get intimidated by the fantastic Turkish fans on the stands of Baskent hall and kept ahead of their opponents throughout the set. Their blocking efforts were more successful than those of the home team and towards the end Germany only expanded on the early lead, built up at the beginning, to close at 25-18

The crowd never stopped cheering their beloved team and Turkey cruised through the second set very inspired and strong. The local heroines established their domination on the court. Their serves managed to derail the opponent’s reception while their spikes were now finding their way through the German block. Turkey piled up an impressive 25-16 advantage to win the one set it needed to absolutely secure its presence in this Saturday’s semifinals.

But it did not stop there.  The players mentored by Marco Aurelio Motta rushed into the third set in full force, but this one was by far not as one-sided as the previous two.  Both teams stepped up their efforts in attack and defense and this paid off as a true spectacle for a deserving audience in the hall. The Germans were able to come back from Turkey’s 4-point advantage at 12-8 to a 3-point lead of their own at 20-17.  The home girls responded by winning the following five rallies to make the crowd ecstatic by finishing the set at 25-23 in their favor.

If at all possible, the next set was even more spectacular.  The battle for every point continued under the deafening noise from the fans on the stands. Germany gradually crafted a convincing lead with a 5-point gap at the second technical time-out, but then Turkey fought back to minimize its lag. Guidetti’s players were still able to get to a set-point by leaving their opponents 4 points behind at 24-20, but were unable to close the set as the home girls managed to tie the score at 24 each to the great satisfaction of the crowd. There was everything to see in this set – from powerful attacks, fantastic digs, insurmountable blocks and exciting aces to that blasting direct kill by setter Naz Aydemir that put an end to it all at 30-28 in Turkey’s favor.

Although no player is to be singled out in a match like this, still Germany’s captain Margareta Anna Kozuch with 18 points and Turkey’s biggest star Neslihan Darnel with 16 became the top scorers of the match.

Affected by the loss or maybe just out of modesty, Kozuch stated: “Although we played well in some periods of the game, on the whole, we did not play well. The Turkish team made some courageous performance on the court. But there is no use talking about this match as we cannot change what happened. Tomorrow’s game is very important for us and we look forward to it.”

Coach Guidetti added: “Turkey played well.  It was not a surprising result because their players come from very successful teams.  I strongly believe that Turkey will qualify for the Olympic Games because they are so determined to achieve this goal”.

“We knew it was going to be a tough match for both teams because Germany is very strong,” Turkish captain Esra Gümüs commented after the game.

“First we played badly, then we controlled the game and made some very exciting rallies. We served well and won the match.  I also congratulate the German team as they also played very well.”

Marco Aurelio Motta, the head coach of Turkey, agrees:  “It was a though match.  The German team served well in the first set so we could not start the match well.  We were better in the second set as this time we served well.  In the last two sets both teams played very well and I think these two sets have been the best sets for volleyball spectators so far in the tournament”.