Innsbruck, Austria, December 13, 2011. By playing host to Lube Banca Marche MACERATA this coming Thursday, Hypo Tirol INNSBRUCK will test out the likes of 5 players that lined up for the final match of the EuroVolley 2011 this past September in Vienna. 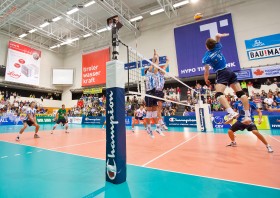 Hypo Tirol INNSBRUCK to face 5 finalists of the EuroVolley 2011

Marko Podrascanin and Dragan Stankovic were eventually crowned European champions with Serbia, while Dragan Travica, Simone Parodi and Cristian Savani had to settle for silver.

With this array of stars MACERATA looks like the clear-cut favorite of the match taking place at “USI Sports hall” for the third round of action in this year’s CEV Volleyball Champions League.

The Italians are currently ranked third in their national league but in spite of their strength, the head coach of Hypo Tirol, Stefan Chrtiansky, is very much looking forward to this game.

“We want to show a great performance and try to take our first points. Our team has been playing really well for the last couple of weeks and we hope to show that good momentum also in the CEV Volleyball Champions League. It is not easy to determine where we stand in comparison with a top team like MACERATA but we want to delight our fans by playing a good match and fighting to win” he says.

After two rounds Hypo Tirol is last in the standings of Pool E with 2 losses, so it is time for the Austrians to catch up if they still want to maintain some chances to qualify for the Playoffs 12.

CEV: MONZA takes on Swiss opponent for second round of CEV Cup