Pesaro, Italy, December 13, 2011. Scavolini PESARO will play host this Thursday to Poland’s Bank BPS Fakro MUSZYNA for the third round of action in the prelims of the 2012 CEV Volleyball Champions League – Women. 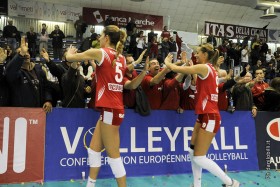 The Italians have scored two wins so far as their opponents from Poland have done as well, but the hosts are topping the standing of Pool E with 6 points vs. 5 for MUSZYNA.

“We are doing quite well in the Champions League. As we played Dinamo MOSCOW we were helped by the enthusiasm of our fans and caused quite a surprise. Last week in Beograd we played a team that was evidently less strong than MUSZYNA. We have to capitalize on our good mood and claim this match as well. Bank BPS Fakro is a strong side and this was confirmed by their win last week in Moscow. They have very good players such as Dutch nationals Caroline Wensink and Debby Stam-Pilon plus some Polish stars like Radecka, Kasprzak, Kaczor and Bednarek-Kasza. They also have a good libero, Mariola Zenik, but still via this match we want to confirm that we are progressing” says Scavolini head coach Luciano Pedullà.