Ceske Budejovice, Czech Republic, December 13, 2011. Jihostroj CESKE BUDEJOVICE lost tonight its second match in Pool D of the 2012 CEV Volleyball Champions League – Men as Germany’s Generali UNTERHACHING struggled only for the opening set and then cruised past with the score of 1:3 (25-18, 21-25, 20-25, 20-25) after 98 minutes of play. 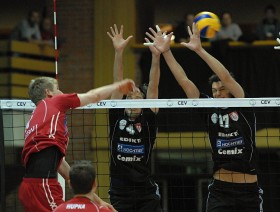 Jihostroj dictated the tempo of the game in the opening set by claiming it in 25 minutes and dominating the scene in all fundamentals.

The Czechs, however, got nervous in set 2 and the game was more balanced.

UNTERHACHING reduced the number of unforced errors and finally clipped the final 25-21.

The home fans (some 1’500 were in attendance) helped their heroes got back on track but Generali scored all key points to move the count up to 1:2.

UNTERHACHING still displayed a very good tempo also in set 4 and eventually wrapped it up in four sets.

“We were not able to maintain the pace we showed in the first set” says local head coach Jan Svoboda.

“We tried to deliver a strong performance in serving and attacking but we simply did not keep up that level for the whole match” he adds.

“They played a great opening set and we made a lot of mistakes there” states the Slovak setter of Generali, Branislav Skladany, “but we improved the quality or our play and eventually won the game”.

Skladany was voted MVP of the game.

“We will try to get our revenge next week in Germany; after winning away with CUNEO, I think we can do the same also in Bavaria” concludes Czech opposite Radek Motys.

Ball explains all in latest edition of...