CEV M: Italy cruises to the semifinals with straight sets against Slovakia

Italy became the third semifinalist at the 2012 Olympic Games - European Qualification for men in Bulgaria, as it secured the top spot in the standings of Pool II. The Italians shut out an ambitious Slovak team 3:0 (25-23, 25-13, 25-22) in the last match of the pool and are awaiting the final standings of Pool I to find out who their opponent will be in tomorrow’s semifinals 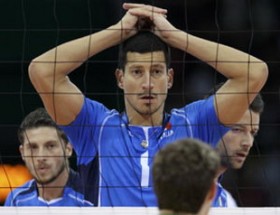 In the first set better offense and better blocking was what gave Italy the edge.  Mauro Berruto’s team made more mistakes than the Slovaks to let the opponents trail close behind in the score and even tie shortly before the end at 23 each.  Eventually Alessandro Fei’s perfect block closed the set at 25-23 Italy’s way.

As a result, Slovakia’s motivation seemed to have sharply dropped in the second set and the players mentored by Stefan Chrtiansky could not stay competitive.

With Luigi Mastrangelo in charge, Italy cruised through the set to win it by an impressive 25-13.

This removed any question marks from the final rankings of the pool, so both coaches chose to play the third set with some of their reserve players on the court.  This resulted in very prolific serving for Italy and a total of 5 aces from Cristian Savani and Samuele Papi.  Slovakia, on the other hand, stepped up its blocking efforts to recover from a 6-point lag and make the ending interesting as 22-23 appeared on the scoreboard, but in the end it was a block by Emanuele Birarelli that finished the game off in Italy’s favor.

With 9 points each, Italy’s Mastrangelo and Fei topped the scorers’ chart of this match, as teammate Savani and Slovakia’s Emanuel Kohut and Peter Michalovic trailed close behind with 8 points each.