Italy vs. Germany has been set as today's final of the 2012 Olympic Games - European Qualification for men in Bulgaria. With an incredible performance by German opposite György Grozer the team of head coach Vital Heynen achieved a sensational victory over heavy favorites Bulgaria by 3:1 (25-22, 20-25, 25-22, 25-16) in the second semifinal in a packed Arena Armeec hall. The President of Bulgaria Rosen Plevneliev and the Prime Minister Boyko Borisov were among the thousands of Bulgarian fans that watched an interesting battle, but ended up disappointed by their team’s broken Olympic hopes. 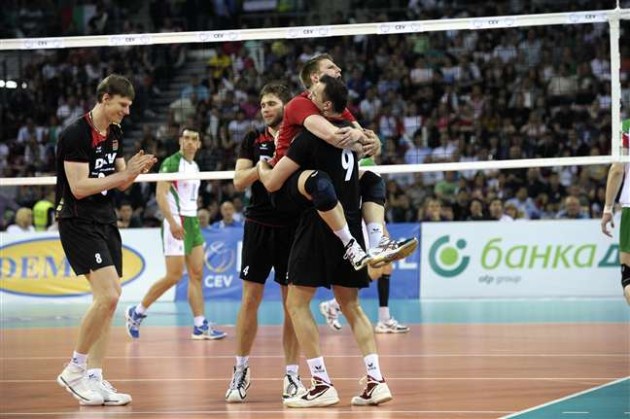 Germany played a fantastic first set. Some powerful serving, especially by György Grozer, gave the Bulgarian reception a lot of hard time and, whenever the home team was able to organize its attack, the German defense was there to dig out even the toughest balls. This way Vital Heynen’s side ran away to a 7-point lead at 16-9. Although with the help of Matey Kaziyski’s strong serves Bulgaria narrowed the gap down to 12-16, its block was not able to stop Grozer’s spikes and the Germans reestablished their advantage at 20-13. A superb performance in offense, serving and defense by young talent Nikolay Penchev, who came in as a sub, once again helped the home team almost catch up at 19-21, but Germany held on to its lead and closed the set at 25-22.

Kaziyski’s technique completely outclassed the German block in the second set. Bulgaria rushed to an 8-4 lead, but then made too many serving errors. Combined with Denis Kaliberda’s contribution in offense, it allowed Germany to flip the score in its own favor to 16-14 at the second technical time-out. Inspired by the crowd, the Lions quickly recovered. Penchev’s performance in reception and serving was more than impressive while Kaziyski and Vladimir Nikolov continued to pressure the opponent with their spikes to lead Bulgaria to a final 25-20 in the set.

Kaziyski’s fabulous performance in offense and also from the serving line continued into the third set and helped Bulgaria recover from an early German lead and gain a comfortable advantage at 18-14.  But then it was time for Grozer to serve and for Bulgaria to make too many mistakes. With 7 points in a row Germany took the lead by 21-18 and did not let go through the end – 25-22.

The story of the fourth set may be summoned in one sentence: György Grozer destroyed Bulgaria. An out-of-this-world performance by the German opposite put an end to the home team’s hopes to make it to the Olympics from today’s final.  A confused Bulgarian team could not find a way to cope with the situation while Grozer scored a total of 15 points (2 aces, 3 kill blocks and 10 in attack) in this set only for a final 25-16 that sent Germany to the direct battle for a ticket to London today.