To no one’s surprise, György Grozer became the top scorer of the match with an incredible tally of 30 points. Matey Kaziyski with 22 points was Bulgaria’s most prolific player, while captain Vladimir Nikolov added another 18. “Congratulations for Germany! They won one decisive and very tough game,” Nikolov stated after the match. ”They managed to handle the pressure and proved to be the better team on the court. We played approximately well, but we made one big mistake that cost us not only the third set, but also the whole game.” His German counterpart Björn Andrae was in the opposite mood: “I am very happy and proud of my team. We managed to win a great game in front of so many spectators here in Sofia. It was not easy, but we kept our concentration during the whole game and showed some very nice volleyball, even when we were behind in the score.” 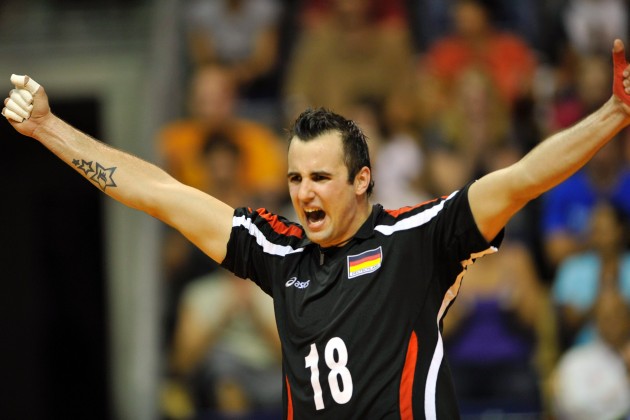 “Our opponent deserved the victory. They showed high-class volleyball tonight, but in my opinion until the end of the third set, both teams had equal chance to win the game,” Radostin Stoytchev, head coach of Bulgaria, commented. ”The lack of experience in our team was the key to our loss. We failed in one rotation in the third set. In the next part of the game there was only one team on court and it was Germany.”  “I want to thank all my players, who played very good volleyball against one of the best teams in Europe,” Germany’s head coach Vital Heynen said. ”I think we were also a little bit lucky tonight after winning the third set. There is one more game left and we will give our best to win it and qualify for the Olympics in our first try.”