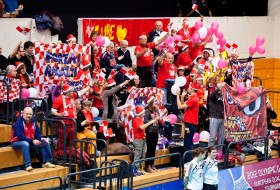 MACERATA takes 3 points after great away game in Innsbruck

The hosting team came out very strong and surprised everybody in the hall with a quick lead that steadily increased and ended up in a 25-18 win of the first set.

The team of MACERATA had to react and started the second set more aggressive especially in their serving and blocking performance.

As clear as the first set, also the second set ended, but for the other team this time (25-15 for the Italians and 1:1).

The third set became the one to decide the outcome of the match and both teams showed a great performance, with many spectacular rallies, and Hypo Tirol INNSBRUCK took the lead after the second technical time-out with up to 3 points.

The Tyroleans came really close to at least claim their first points in Pool E which also would have been deserved after today’s performance.

However, Lube Banca Marche showed their best game at the deciding points and came away with a 25-23 win and took a 2:1 lead.

With this they took a quick lead also in the fourth set and were up by 8 at 16:8.

At the end it was not enough and MACERATA came away with 3 points and INNSBRUCK still has to wait for their first points in this year’s campaign.

Their next chance will be in 5 days in Macerata for the fourth round of action in Pool E.

Head Coach Stefan Chrtiansky comments: “I think that was a little Christmas present for all the people in the hall. It was a great match with good Volleyball right before the holidays. I am really satisfied with our performance today and we showed great morale and team chemistry. I think the reason we could not finish the third set is the fact that we are missing these situations in a match on regular basis in our league. With a little more experience we might have taken our first points today. I hope we can maintain our uprising form over the holidays into the New Year. Now we are focusing on Macerata again in 5 days and 2 more Champions League games in January”.