Pesaro, Italy, December 15, 2011. Bank BPS Fakro MUSZYNA is the sole leader of Pool E in the prelims of the 2011 CEV Volleyball Champions League – Women after three rounds of action and especially after the group mentored by Bogdan Serwinski scored tonight a 3:1 win (25-22, 25-20, 24-26, 25-20) over the hosts of Scavolini PESARO at “Palacampanara”. 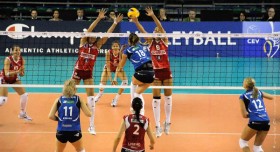 MUSZYNA claims away win to be undisputed leader of Pool E

Right before the start of the match Marcelino Tavares celebrated his farewell as the referee from Portugal was whistling the last international match of his career.

MUSZYNA caught a good start but Scavolini was able to claw back to level at 13 and 19, before the guests got back their best tempo to finish it at 22-25.

The third set turned into a never ending battle with the guests missing two chances to finish it off in straight sets (22:24) before Scavolini scored the next four to re-open the match (26-24).

The Italians stayed tuned until a tie at 19 in the fourth set before Bank BPS Fakro changed gear to claim a well deserved win.

Vesna Djurisic was awarded the MVP title of the match having scored 15 points, including 5 blocks and 2 aces.

“We deserved this win as we showed more determination tonight. We were a bit nervous right after the start of the game but I am very satisfied with our performance” says Bank BPS Fakro head coach Bogdan Serwinski.

“They served and blocked well and this was something new for us in comparison with the previous matches where we actually had ousted our opponents via these fundamentals. It was not easy to finalize our side-out and next week in Poland we will have to show where we stand right now” comments home mentor Luciano Pedullà.